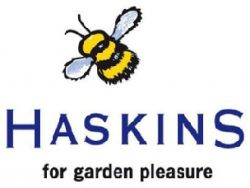 Cultivation Street is a campaign founded by David Domoney, celebrity TV Gardener and Broadcaster, to recognise and reward communities that are caring for their streets, as well as encouraging other communities to join together and start anew. The campaign was specifically introduced to celebrate community gardens and their ability to bring people together using nature to inspire, heal and connect the communities they are a part of. The annual ambassador competition rewards those that go the extra mile for their local communities.

Sophie has been a Cultivation Street Ambassador for Haskins in West End since February and co-ordinates the provision of compost, plants, bulbs, gloves, seeds and bird food to local schools. Working closely with Townhill Infant School, The Gregg School and Bitterne CE Primary School in Southampton, this summer Sophie worked with the children to increase their interest in gardening and helped them paint plant pots and grow sunflowers. In particular, Sophie helps out at Bitterne CE Primary School’s nature group, which sees a group of six children get together after school to learn more about gardening. Looking to the future, Sophie plans to refresh, replant and repaint Bitterne CE Primary School’s garden.

Delighted to have been announced as a runner-up in the competition, Sophie commented: “I’m passionate about teaching children what I know about gardening because they’re the next generation of gardeners. It’s great seeing how excited they get over a plant they have grown and it’s great to get children interested in being outdoors and enjoying nature, rather than sat in front of a computer screen. This is something Haskins is really keen on encouraging – getting children interested in gardening from a young age, which is evident from our 'Garden Gang' campaign.”

Before the school holidays, Sophie worked with Shamblehurst Primary School to help create a memory garden for a 7-year old pupil who passed away to cancer. Sophie sourced compost, large pots, herbs and wind chimes for the memory garden.

Sophie continued: “I’m proud to be a Cultivation Street Ambassador because I want the children I work with to have a garden they can enjoy and I want them to feel pleased that they have played a valuable part in creating it for others to enjoy. I hope that over the next few years, I can link up with more schools and community groups to see how Haskins can help.”

Alice Whitehouse, Cultivation Street’s campaign manager, commented: “This year’s campaign has seen more entries in all categories and we’ve been astounded by the level of gardens and projects entered into the competition, as well as the devoted ambassadors that have worked hard throughout the year. The Ambassadors are an integral part of the competition and Sophie from Haskins has been fantastic in her first year as an ambassador. We have no doubt that we will see more great work from her throughout the year.